Over 40 years in the making

Equipped with completely new features to meet the high standards required for safe decommissioning, Brokk has once again delivered a world leading special solution based on over 40 years of development.
Mostra tutti

For any challenges that may occur, the recently delivered robots are equipped with a new solution for remote controlled manoeuvring up to 3,000m away, with three different control systems and specially developed software for efficient gamma detection. It’s hard to think of an environment where remote control operation is more critical than in a nuclear plant as the spread of radiation is unpredictable and in order to assure the safety for the operators, long distance manoeuvring is crucial. Through the development of a relay station Brokk has made it possible to efficiently operate the robot from a 3,000m.

The relay station is a standalone unit that is powered by a battery pack and holds a 5m telescopic mast. The mast is equipped with a 360º camera and an antenna that provides the robot with a 1,000m remote controlled line of sight that is completely wireless. The station is attached to the robot with a hydraulic trailer connection designed to unhitch with the press of a button from the control room. 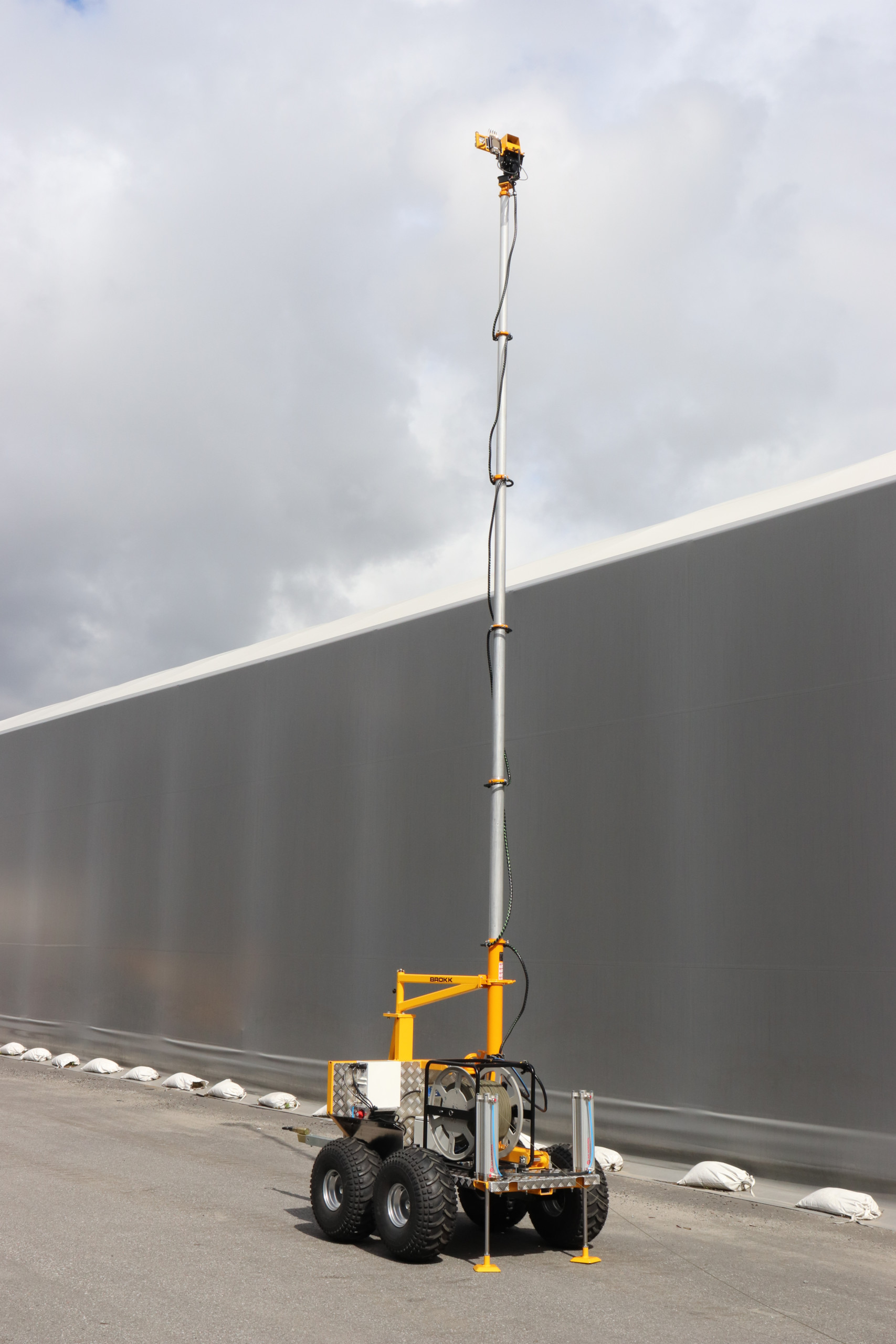 When facing decommissioning inside a nuclear plant and when wireless operation with the help of the relay station is not possible, Brokk has equipped the robot with an intelligent cable reel that adjusts the length of the optic cable in order to prevent signal disruption. Equipped with four radiation protected cameras, two of which are ‘PT’ (pan/tilt) controlled, Brokk’s own camera control system enables real time manoeuvring of the robot. Thanks to the option of manually controlling the PT cameras, the operator can manoeuvre the robot through any environment. Navigating through unknown territory or performing complex tasks usually means the need for different attachments but the cameras, combined with the quick hitch solution, allows for such activities as remote tool change, without the need for people to be involved.

Handling efficiently radiation waste is easily undertaken as the robot also has a gamma detector which plays an important role in determining which area or material that needs immediate attention. By finding the hotspots with a mobile detector, the work is performed much more efficiently. The software used has been developed by Brokk being purpose designed for the collection of data and has the potential to be customised to meet customer chosen alarm thresholds.

Damage caused by radiation is devastating, not only to human life but also to the surrounding area. Human safety should always be the starting point when products in the nuclear industry are developed and to make sure that no people are exposed to radiation, whether it be decommissioning or in the event of a disaster, a high tech product needs to be as reliable as possible.

One example of how Brokk assures reliability is via radiation protection for sensitive components. All electronic components, including video equipment as well as the three different redundant control systems are all protected to withstand radiation in order to increase the life span of the robots. Brokk has also ensured that there is a backup solution in case of emergency with a diesel battery hybrid robot equipped with a redundant control system that enables operation if the two main systems fail enabling evacuation.

Manoeuvring is done by one operator from a workstation with user friendly and ergonomic controls with joysticks, levers and switches all close at hand. No
matter where the control room is placed, a single desk makes the setup easy with Brokk integrated software and components being tailor made.

Thus in the aftermath of the disaster in Fukushima, the equipping of emergency services with equipment that is specially adapted for use in radioactive environments has increased. Fortunately, nuclear disasters do not occur often, but when they do, the ability to quickly install custom equipment can play a crucial role no matter how extensive an accident becomes. Being able to effectively block radiation sources and minimise spread can notably reduce exposure to both people and surrounding area. Remote controlled robots now play a significant role and are in many situations crucial for the nuclear industry.

LEARN MORE ABOUT BROKK IN THE NUCLEAR INDUSTRY

Brokk Italia (including subdomains) uses cookies and stores your IP number to give you a better experience on our site. By continuing on the page, you agree to the use of cookies.