Daniel Bergeman, Brokk, presents a case study showing how robots have provided a fast, efficient, and safe solution to descaling in the preheater tower at LafargeHolcim’s Cauldon cement facility.
See All

Descaling refractory and build-ups in a preheater tower is a time-consuming and risky process. Global manufacturer, LafargeHolcim, now leads the way, through its UK factory in Cauldon. A custom-built, remote controlled descaling robot from Brokk mounted on a telescopic arm is now in use at the factory – an idea that has been praised for its approach to safety, and that has made descaling more efficient.

In the county of Staffordshire, West Midlands, England, the Cauldon cement factory nestles in the rolling green hills. The small village of Cauldon has Manchester to the north, Birmingham to the south, and is on the border of the Peak District National Park, the oldest in the country. Cement has been made at the factory since 1957. In just over 60 years, quarrying limestone has helped build a modern community, and the factory played a key role during the rebuilding of the UK after World War II.

It has been said that the preheater tower at Cauldon is as much a synonymous feature in the valley as the oak trees. The Cauldon area has a history of limestone quarrying going back several hundred years, meaning that it was no coincidence that it was there the first dry process factory was built. Its founding helped modernise the industry, and it was updated to current technology with heat exchangers in the 1980s.

South of the factory is the limestone quarry from which 65 t trucks bring their cargo daily. A number of limestone quarries have been started around Cauldon over the years, with the site subsequently being restored. The first area that became a deep limestone quarry is today a lake surrounded by rich wildlife. Trials are underway to investigate how best to recreate biodiversity on limestone land, and these are already showing excellent results. 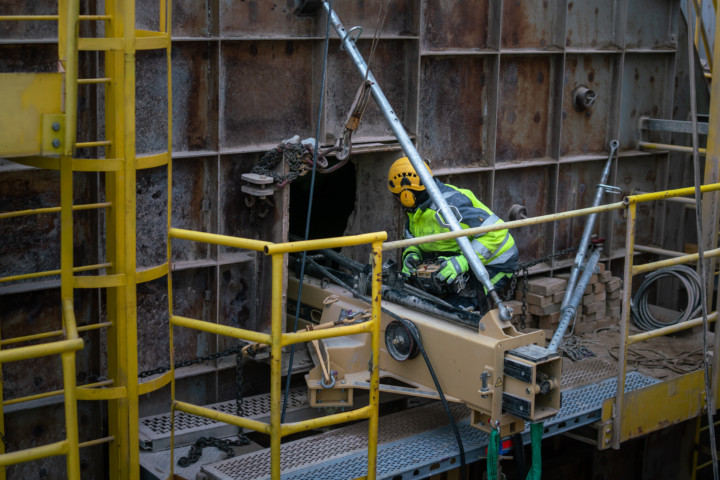 Over 40 species of birds have been recorded in the old quarry, on the restored fields and around the cement factory – a strong indicator of biodiversity, and how well the area has recovered. Lafarge Cauldon has been working for several years to reduce its carbon footprint and around 60% of the fuels used currently come from recycled materials. The company does whatever it can to find ways of reducing its footprint. It is currently under the threshold for permitted emissions, and has been for over 10 years.

LafargeHolcim is a global giant, represented in around 70 different countries, with over 70 000 employees – the Cauldon factory managed to excel in 2019 thanks to its progressive streamlining of processes, and ensuring employee safety. The factory won the LafargeHolcim Global Health and Safety Award for their work during the January shutdown.

That is the time of year when production is usually stopped to perform such maintenance tasks as descaling the built-up coating that accumulates during the process, and the factory is given an overhaul. Much of the factory’s focus is on catching up with everything during the three weeks the shutdown normally lasts, but working safely through a concentrated production window is also very much a concern. Historically, this has not been easy.

There are of course risks involved in people working in confined spaces such as cyclones and calciners in the preheater tower, not least because of falling objects, despite the safety nets and many other controls the facility has in place to protect its workers. To clean out the coating, workers have had to enter via hatches, and then clean the inside using hand tools from the top all the way down, which takes at least 48 hours in the Cauldon facility’s calciner. The process of getting all the debris out by hand is also time consuming.

A new solution is the ‘Brokk Descaler’, from Brokk, a Swedish company, and leader in remote controlled demolition machines. Using a Brokk robot to clean the cement kilns has been a common solution for several decades. What is unique about the Brokk Descaler is that it can work vertically, with technology specially designed and mounted on a unique telescopic arm.

The descaler is electrical, and ideal for the heavy and demanding work in a cement factory. Despite its flexible and compact size, the robot has sufficient range and power in its jack hammer to chip off the built-up coating created by the production process.  The robot means that no personnel have to be put in danger working in the kiln. Only a single operator is needed working at a safe distance, and the robot is able to descale much faster than it would normally take an entire team. In an industry in which one hour of downtime implies lost production, the investment in a Brokk Descaler is very quickly paid back.

The operator can choose the best position to oversee the work, and is not exposed to heat stress, vibration, gases, or the risk of falling material, or even a complete sheet of scale. 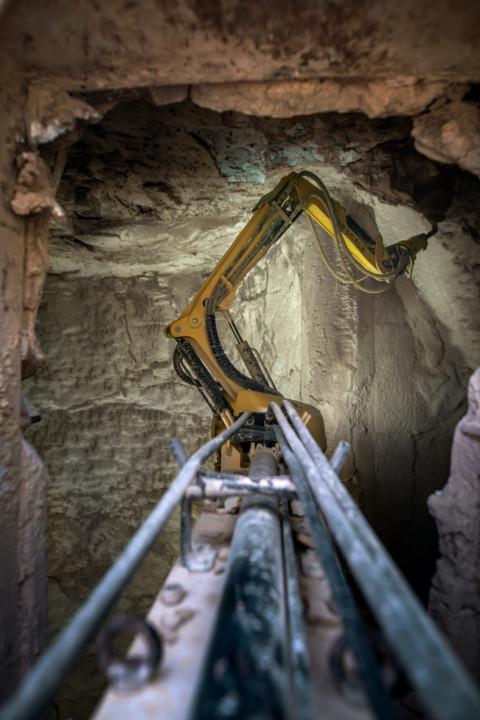 LafargeHolcim in Cauldon is now regarded as a leader within the working environment. Employees were impressed with how the robot has cut their exposure in the preheater tower and the company is proud to be able to demonstrate this way of working. While initially, the solution cost the company more money, it yielded significant value in terms of safety, and has saved money in the long-term. Cauldon has saved labour costs, and efficiency has been improved. The descaler robot saves between 24 – 36 hours of work.

Being able to work more efficiently was an important factor for Cauldon, especially with an improved outcome. The January period is the time when it invests heavily in the factory in the form of maintenance, which is why being able to restart production as quickly as possible is important. Contractors have been hired to operate the Brokk Descaler, who have undergone a short training course.

The Brokk Descaler will now be used in January 2021 to clean the calciner route. The descaler can also be equipped with heat-resistant accessories, and because of its well-protected cylinders and components, the work can start earlier without the risk of breakdown due to the heat. The robot can get to work when the temperature is around 80˚C.

The installation process involves cutting open hatches that the robot can operate through, which do not need to be any bigger than 1 m x 1.5 m; six were opened in Cauldon. The facility had the hatches prepared before the robot arrived in 2019. Some planning was required by Cauldon’s engineers, and they performed the work themselves. The hatches are now in place, and the process only involves mounting the Descaler tower from the platform up to the hatch, and then lifting the robot into place before work can commence.

Anyone familiar with the Cauldon cement factory may also be aware of the problem of getting the Brokk Descaler robot into place using a crane. There is simply not enough space. A main road runs below the preheater tower, where a falling rock could seriously damage a car. Cauldon calculated that the robot could fit in an internal lift, and be taken up to the right level, from where it could move to the hatch under its own power.

LafargeHolcim has used two different robots – the smaller one, Brokk Descaler Single, can work in
a space of up to 7.5 m in diameter, and the large Brokk DescalerTwin covers up to 9.5 m diameter. Limited space is not a problem for the robot, which can operate at a 360˚ angle. Cauldon will also start using the Brokk Descaler Single model in 2021, in the confined space of the gas riser. 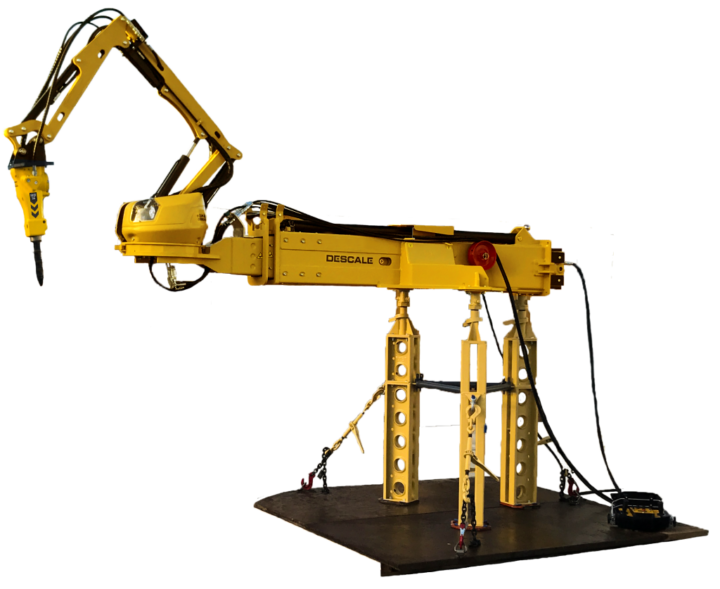 The Brokk Descaler is a solution which has been used in cement factories in Australia, Latvia, and other countries. Cauldon now uses the descaler robot as a matter of course with its unique telescopic arm able to do the job safer and faster. Brokk is a leading player in the field of descaler robots. Descaler robots are divided into seven different industrial areas: construction, tunnels, mining, process, cement, security and rescue, and nuclear power. Many customers have been using Brokk products for over 40 years, the company is proactive in scanning the market to find out what customers want and may need.

Daniel Bergeman has over 20 years experience in journalism. Daniel grew up in the north of Sweden, surrounded by forests, gravel roads and wooden houses. At the age of 17 he moved to the city and learned that building with the right material in the right place can provide great benefits. 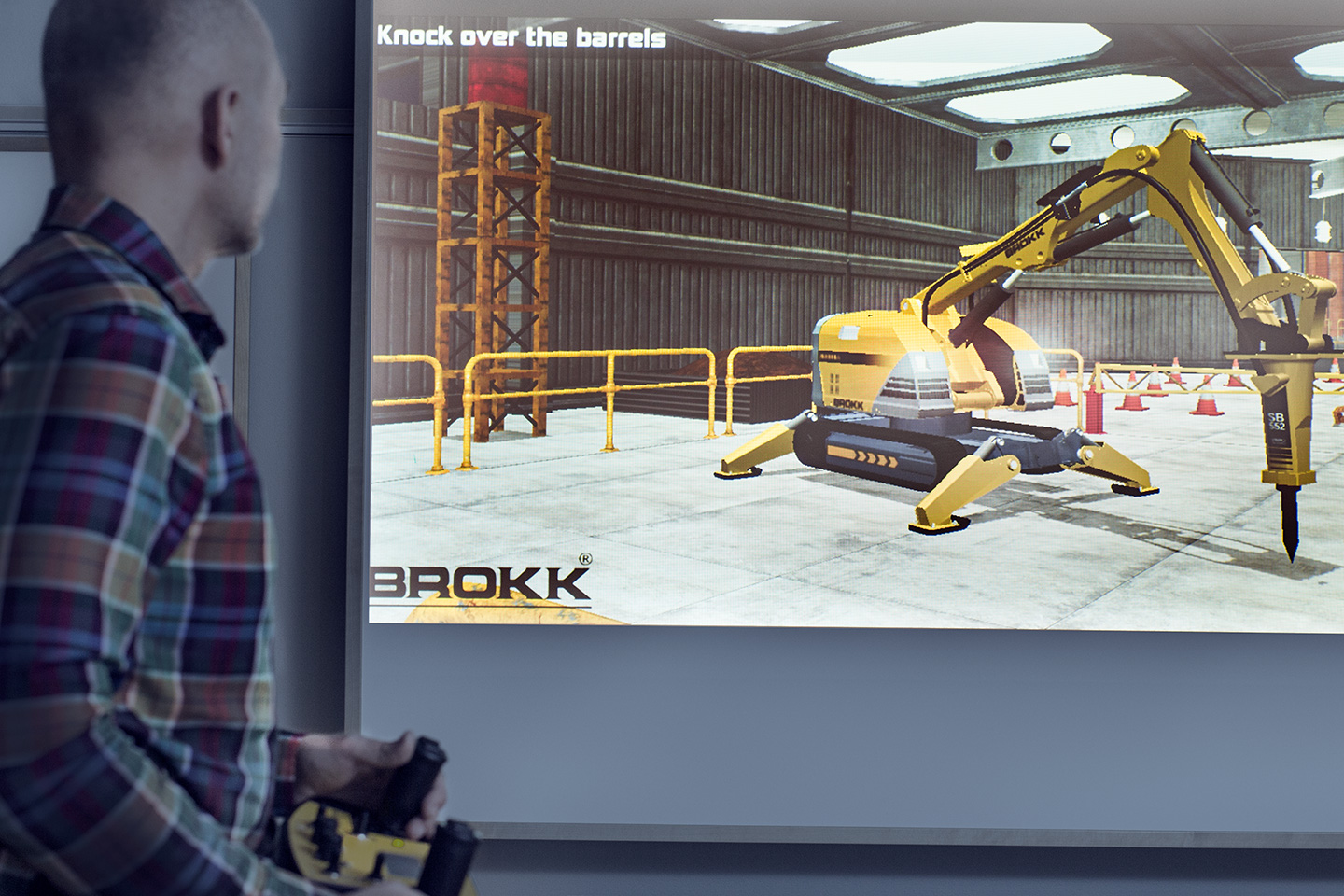