The mining company Grecian Magnesite decided to mine a unique deposit in an equally unique way – completely fossil-free and without explosives.
See All 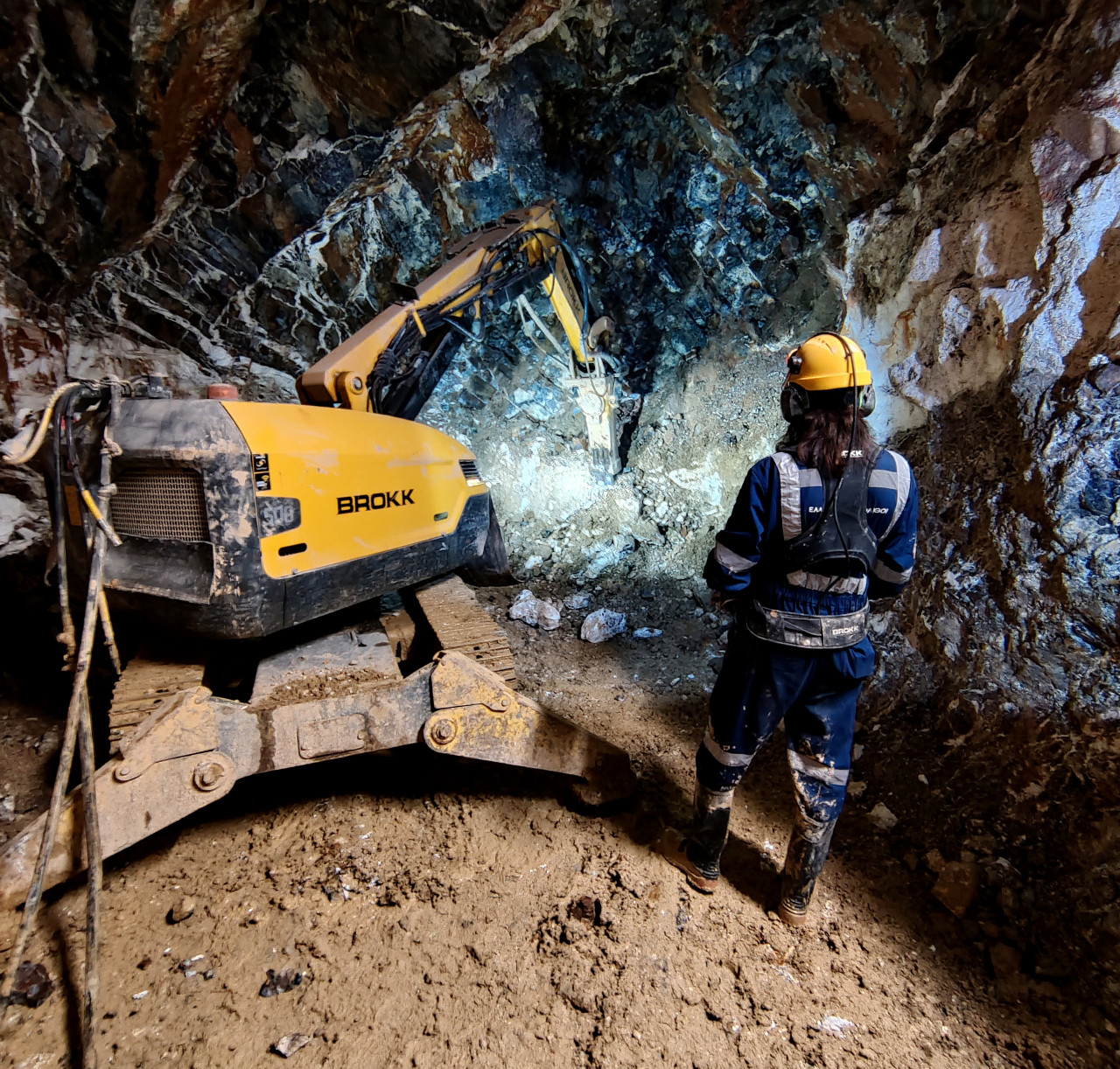 Mining of the valuable mineral magnesite is underway in the Greek archipelago. One of the richest deposits in the world was discovered here. The mining company Grecian Magnesite decided to mine this unique deposit in an equally unique way – completely fossil-free and without explosives. With an electrically powered demolition robot and loader, this small-scale mining in the Koutzi underground mine is environmentally friendly, safe and efficient. “The feeling in the tunnels is that you don’t think you’re underground, it’s a great experience,” says engineer George Bourmas, who designed the mine.

The island of Evia, or Euboea as it is also called, is the second largest island in Greece, after Crete. With its mountainous surroundings and pine-covered slopes, Evia gives a dramatic but at the same time green impression as it rises out of the Aegean Sea.

Many believe that the dreamlike beaches and small bays could just as easily have been found in the Caribbean with its blue-green sea. The paradise surroundings attract many sun-seeking tourists to the island, and the mountains attract hikers who can find ancient castle ruins and hot springs that were visited by both Winston Churchill and Aristotle Onassis.

In fact, the Evia’s history goes back a long way, all the way to early antiquity. According to Greek mythology, even the Greek hero Heracles bathed in these same springs to find strength. 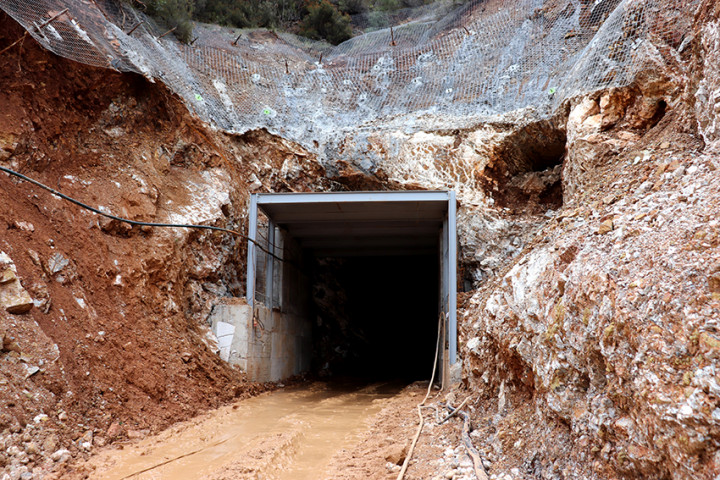 Now in 2022, new history is being created in the Greek mountains. When George Bourmas looks out of his office, the entrance to the mine where they began geotechnical investigations some years ago is not far away. Grecian Magnesite has owned the rights here since the 1950s.

“We had seen signs of really old mining and managed to date the work back to 1832 when the first small underground mines started. Now we have portable laser scanners to survey the mines. Core drilling exploration showed very concentrated magnesite. With more extensive test drilling, we found 200 metre-wide and 400 metre-deep veins, a total of 20 million tons of highly concentrated magnesite, one of the purest deposits in the world,” says George.

That means at least 100 years of future magnesite mining on Evia.

The success meant that the next step in the mining project could begin with a strong belief in the future.

George created a 3D model of the deposit and began design work on the mine in 2018. Then he was in a position to design the machines that would work in the tunnels. Grecian Magnesite only has experience operating open-cast mines, but here the circumstances were different and George saw the potential of starting a tunnel project using narrow vein mining.

“The high quality of the veins made it a very important project for the company. We saw an opportunity here to extract as pure magnesite as possible with the aid of the right machine in a fossil-free way. We had high ambitions and wanted to create the most environmentally friendly and safest underground mine,” says George. 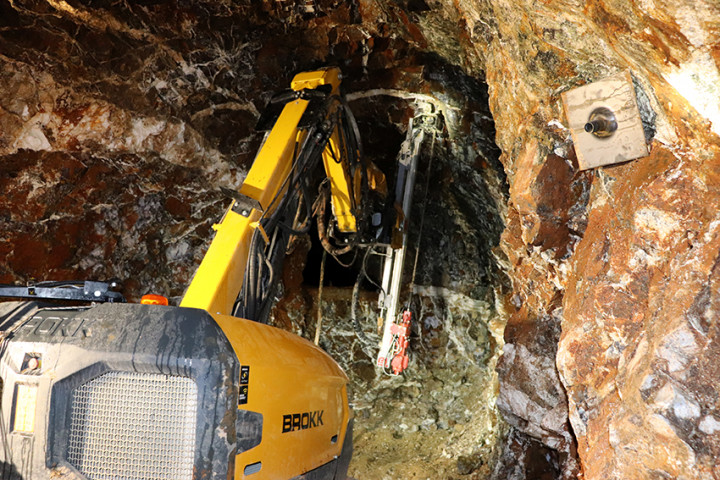 For securing the rockmass with swellex bolt, the Brokk 500 was equipped with a drill to install the bolts.

The solution was a Brokk 500 from Swedish Brokk AB, the world’s leading manufacturer of remote-controlled demolition robots. It is electrically powered and combines strength and agility – in other words, perfect for narrow vein mining.

George had a theory of just using a hydraulic breaker and breaking up the material to the right size, instead of using explosives, and then loading the material out with a battery-powered loader.

“I met many sceptics who were doubtful about how effective this demolition robot would be. But I knew Brokk’s robots and my expertise is in calculating. I also knew how fragmented the rock looked and therefore I thought it would be possible to break the magnesite apart with a wide chisel at speed and in an environmentally friendly way,” says George.

The company decided to test a Brokk 500 equipped with a 700-kilogram BHB705 breaker and the project turned out well.

When Grecian Magnesite received all the permits from the Greek government in 2021, the hydraulic breaker was set to work on the rock on 9 December.

“We have large veins here and the Brokk robot is the most suitable machine in the world to handle this type of assignment productively. Our only problem is that we are breaking up the rock at such a fast pace that the loader does not have time to take out all the material fast enough. But that’s a pleasant problem to have. The alternative would have been blasting, but this would have taken longer and created a large disturbance zone that would have required us to send the material for sorting, but this is not needed. Now we perform the mining with surgical precision and in this way we save both time and money on the project,” says George.

With this innovative underground mining approach, Grecian Magnesite will substitute imports of high purity magnesite from third countries, costing approximately €80 per tonne with Euboean magnesite at a cost between €25-30 per tonne.

Safety on-site is very important. Electrically powered and remote-controlled, a Brokk robot makes the work safe for the operator.

But another important component is the safety work that is a priority for Grecian Magnesite. George has his own experience of this that contributes to his desire to create as safe a working environment as possible.

“I know how badly things can go with explosives and how demanding and necessary the safety work is. In 2008 and while working for another company, an employee died underground and I was nearby, I was hit by the pressure wave, so safety is something I’ve been working hard on. We have managed this thanks to the Brokk robot, in which we have a reliable and efficient machine. The air is also completely free of diesel fumes, you hardly think that there is any activity going on when you are down there,” says George.

To secure the rock, Brokk 500 is used to drill holes about 2 metres deep, into which the operator then pushes in a swellex bolt which, with the aid of high water pressure, expands and thus secures the rock.

“We contacted Brokk because I know they had machines that were strong enough but still agile. Tests showed that we could move forward 10-12 metres per shift, but it is possible to develop this even more. With blasting, we might have managed 3–4 metres per salvo and at best 6–8 metres per shift. The Brokk robot works continuously, so we can keep up a high tempo. With two machines and two teams, my assessment is that we could be up to 20-25 metres in eight hours,” he says.

The operator uses the arm system of the Brokk 500 and can stand 25 metres away from the work zone.

At present, we are mining magnesite at a depth of about 200 metres.

“Since the start, we have not had a single incident and nor has any operator mentioned that they have seen anything fall down. We just sculpt the rock with the breaker and then we secure and load up, it’s a very smooth way of working,” he says.

George has widespread experience of mining and was educated at the National Technical University in Athens. He has since added a PhD in underground mining engineering and experience as operations manager at several bauxite mines, conducted technical studies for some of the world’s largest mining companies as well as tunnel projects in Qatar, India, the Balkans and Greece.

“I’ve seen all sorts of underground mines and tunnels and this is the first where everyone feels extremely safe. We are the first fully electric mine in Europe and perhaps also the safest – we don’t have to be worried about anyone using explosives incorrectly, we have no diesel fumes and no rockfalls. That feels great and allows us all to sleep well at night,” says George.

For over 60 years, Grecian Magnesite has been manufacturing products from the versatile mineral magnesite for various industrial applications. Magnesite is used to produce magnesium oxide, which acts as a refractory material for the steel industry and as a raw material for the chemical industry.

In total, there are over 250 products involved, ranging from medicines, environmentally friendly leather tanning, cement and water purification to brakes for exclusive cars and electrical components. Some products have been developed in their own laboratory and others in collaboration with the global customers. All production can be traced back to the mining operation and process technology used.

“The Koutzi underground mine will provide the highest quality magnesite ore for many decades to come, and at the same time the market is growing and more uses are emerging every day for this carbon-neutral and versatile rock.” 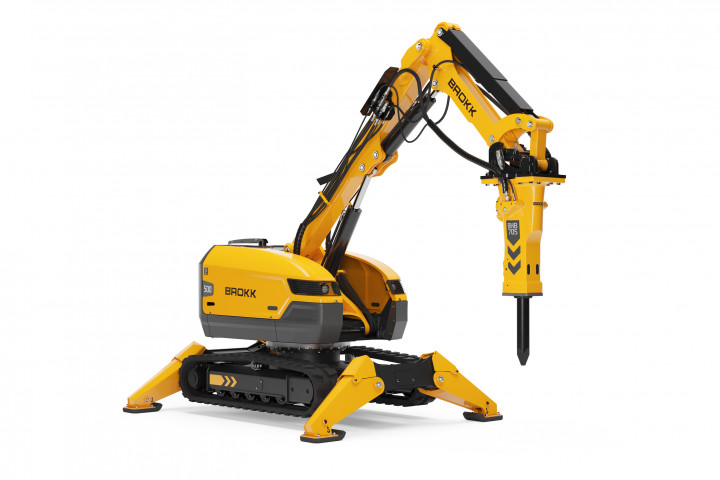 The Brokk 500 with a BHB705 hydraulic breaker was chosen for the project thanks to the combination of strength and agility.

The future of mining

The company’s efforts with its Brokk 500 have resonated in the mining world. A mining company from northern Greece and a Swedish company want to visit the Koutzi underground mine to possibly copy their recipe for success.

“They’ve been told how productive and safe this type of mining is and want to see it for themselves. We think it feels good to show the way in such a forward-looking mining project. It aligns well with our strategy to extract key mineral resources for future generations and drive the transition to sustainable mining,” says George.