Daniel Bergeman, Sweden, shows how robots can help in modern mining operations north of the Arctic Circle.
See All 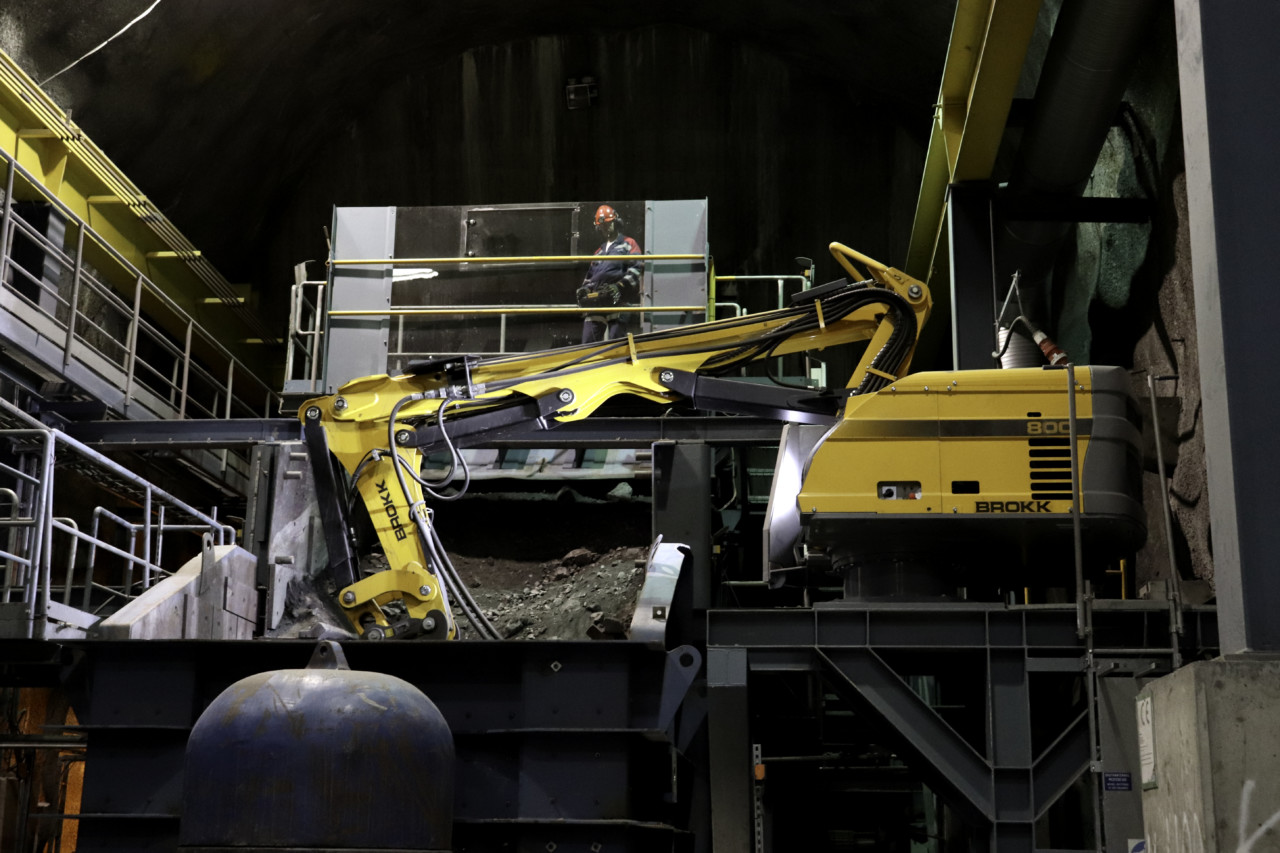 Mining began 100 km north of the Arctic Circle near the town of Malmberget in 1888, when the 500 km railway between the Norwegian and Swedish coasts was completed. Today, Malmberget and the mine in Kiruna are the world’s two biggest underground iron ore mines. Due to the rich deposits and resultant mining activities, healthy thriving communities sprang up where generation after generation of the local population have been able to work and earn a living.

Two globally unique urban transformations are currently taking place, as both Malmberget and Kiruna must move due to underground mining operations spreading out, slowly but surely.

In the case of Malmberget, the community will have to move 5 km to the neighbouring town of Gällivare when the Vitåfors mine expands. The Vitåfors mine mainly produces pellets for steel industries and its biggest customer is SSAB in Luleå, Sweden. LKAB exports to Europe, the Middle East and North Africa, and also significant amounts to Asia.

LKAB has one of the most energy-efficient industrial processes, with the lowest climate impact from mine to finished iron ore products, but the bar is set high. The long-term vision is a digitised, autonomous mine free of carbon dioxide emissions.

The company aims to set a new global standard for sustainable mining at great depth with dramatically reduced environmental impact. To achieve this, it is seeking to become a fossil-free industry.
Ore is extracted from LKAB’s underground mines by means of sub-level caving. This mining method is based on creating voids in the orebody by drilling and blasting. When the ore is removed, the waste rock falls and fills the void automatically. 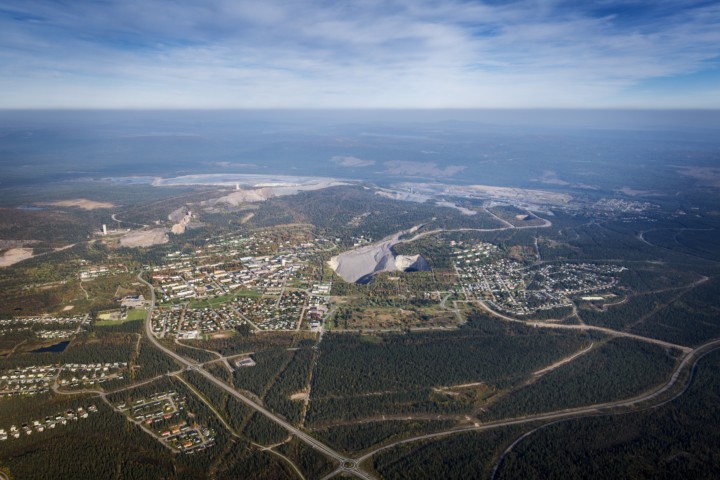 The small town of Malmberget seen from above with the Vitåfors mine in the centre.

A system of arms

A few years ago, an internal project was started to improve the efficiency of work at the crushers, which are located 1250 m below ground.

The company sought a new solution for handling boulders that are too large for the crushers, instead of having to drill and blast them apart. To solve this challenge, a system of arms that reach sufficiently far down, and with a powerful machine capable of crushing the boulders, were needed.

In 2016, procurement procedures were established in respect of two machines for installation at the crusher, and in August that year, Swedish company, Brokk, a manufacturer of remote controlled demolition machines, had won the state procurement. The solution was two electrically driven Model 800 robots, which are Brokk’s biggest standard machines. The robots usually weigh 11 t, but the models were specially modified and weighed 7.5 t as delivered.

A Brokk 800 is effective for the heaviest and most demanding work. It combines size and reach with power in the hammer that has a greater impact force than any other remotely controlled demolition robot on the market.

The arm has a 5 m reach down into the crusher, and is thus able to get at the rocks trapped there. In the modified solution, the usual caterpillar tracks were removed and the robots were bolted onto individual pedestal base to remain stationary with maximum stability.

The company delivered a total solution that included transportation down into the mine, assembly and a 3 day training course from its academy. As a result of the training, LKAB is now able to perform a great deal of the service itself onsite as the service personnel are able to take care of it.

Benefits of the solution

Extremely high standards were demanded of the robots – underground mines belong to the toughest environments to use a hammer in, so the machines must be powerful, equipped with a vibration proof electrical system and able to withstand physical force.

In Malmberget, LKAB mines and processes a total of 17.8 million tpy of iron ore, of which 9 million t comes from the section where the robots are located. The robots are placed opposite each other next to their own crushers, which means there is never any queuing time. This also works well when it is time for maintenance, as LKAB can switch between the two robots.

The safety aspect is another important factor for the company, and the robots have allowed for the creation of a safer work environment for the operators, who now stand protected. Due to the remote control, the robot operators can stand upright on a platform behind blast-resistant glass, which improves safety significantly and provides a more pleasant work environment as they no longer have to sit on a vibrating machine.

It is positive that the robots are electrically driven, as the company is working hard to become a fossil free industry as far as it possibly can. A diesel driven excavator could have been used instead, but the company does not see that as a good alternative from an environmental standpoint. In all, there are eight operators working shifts with the crushers and the robots. Kurt Karlsson has worked in the mine for 22 years, of which 10 as a crusher operator. He is a Malmberget resident and an owner of one of the few houses that so far have not been redeemed for cash by LKAB.

There are a few operators remaining in a part of Malmberget that is still standing, but it is just a matter of time before they also have to move, which will be the natural outcome of it all. Over the years, he has seen a few changes down in the mine and with how the occupation has changed thanks to the technical advances in machines.

It was not that long ago when they had to use a truck with a drilling rig on top take care of rocks that were too big. When they had finished drilling, the boulder would be charged with dynamite and blasted. The security aspect has improved.

The robot means the operators are mostly able to hammer the boulders apart and do not have to use as much dynamite. Avoiding the gases produced during blasting is a key benefit. Furthermore, handling dynamite and having to evacuate is time-consuming. It would not be possible to look down into the crusher if an operator was sitting in an excavator, so being able to step up onto a platform is crucial. 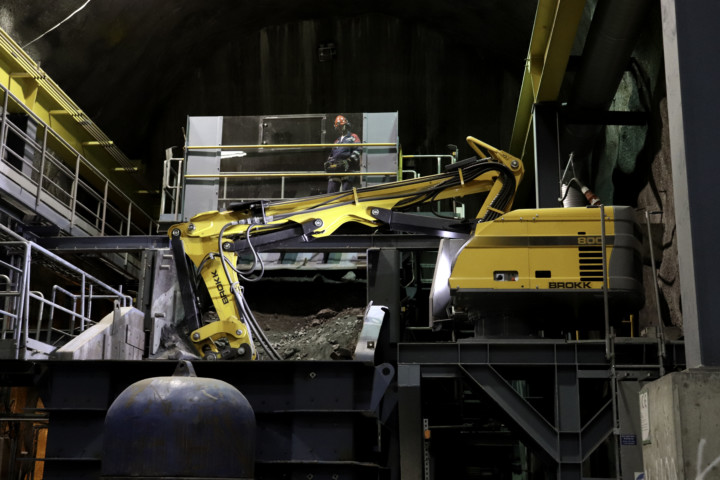 Because the robot is electrically driven, it has a very short reaction time and starts at the press of a button, like plug-and-play.  If there is a blockage in the crusher, the conveyor continues to feed in more rock before it is switched off. In these cases, it is easy to use the Brokk robot to lift, rotate and turn over the rocks to get at whatever it is blocking the crusher. The boulders can weigh up to 5 t and have a diameter of up to 1.5 – 2 m.

One aspect that LKAB placed great emphasis on was the very limited amount of space in the rock chamber, and the challenges involved in adapting the Brokk 800 that were taken on by the technical department.
There was a lot of customer contact with constant crosschecking to ensure correct installation. There was a gantry overhead that the robots risked colliding with, which working with LKAB helped to avoid. The team also needed slew limitation to prevent the robot bodies from rotating into the rock wall. Because they were able to solve a great many questions early on, there were no surprises once they were onsite installing the robots.

This type of close collaboration is beneficial for both parties, as it means there is a functioning solution in place more quickly. It is especially important when it concerns stationary machines like in this case, because the forces that must be taken care of are enormous.

There are 15 designers in the technical department that switch between product development and customised specialist machines – everything from robots weighing 600 kg which are able to operate in bathrooms, to the Model 800 weighing 11 t that is used all over the world in mines and major infrastructure projects such as tunnelling.

Another special function on the Model 800 for the Vitåfors mine, in addition to the platform, was an application christened the ‘relax system’ by the designers. Should the robot break down, a system can be activated that makes it relax its joints. Switching off any hydraulic loader or machine will cause it to stop in that position and become completely rigid. The company incorporated a button position that causes the robot to slump and go limp when the ‘relax system’ is activated. Then it is just a matter of lifting the machine with the gantry so that it is not in the way and is easier to repair.

These are robots with the most specialised and extra equipment available in the basic offering, including a camera monitoring system that allows remote control from a safe distance. The camera monitoring system has also been used successfully by the company in mining operations in connection with scaling.
The company has machines in Chernobyl that are still in operation and several in Fukushima, Japan, where the authorities were quick to send in Brokk machines after the nuclear disaster. They are used for demolition, handling blasting debris and placing it in radiation-proof containers.

The company has always made technological advances to be the predominant demolition robots with service availability throughout the world. 90% of its production is exported from Sweden, with the US as its biggest market. These successes are founded on the ongoing improvements to the Lincoln Tunnel which connects New Jersey and Manhattan, where the company’s early machines took part in pioneering work beneath the Hudson River.

In 2019, the company received the biggest single order for 60 robots to a customer in Asia that operates in the security and rescue sector. The robots were designed for use in areas within disaster control, reconstruction and security. For example, Brokk’s took part and assisted with demolition work at Ground Zero after 9/11. In the mining segment, the company has significant exports to the South African mining industry.
When visiting a mine, the customer often has a specific project in mind for the robot, but the company prefers to demonstrate all of its fields of application so the customer gets as much as possible from their robot.